skip to main | skip to sidebar

At the core of the global brand Bugaboo's DNA is mobility.  This Netherlands based company redefined the baby stroller in the mid-nineties enabling Moms and Dads to easily maneuver urban streetscapes.  It opened up a whole new experience for baby who could now accompany a parent on jogging routes and be easily bused around in cars, into restaurants and onto planes.

And speaking of planes, the Dutch designers have applied their core competency towards creating luggage.  What makes their concept unique is that the suitcase is designed  to be pushed, which totally makes sense.  Pulling luggage, especially when it's heavy is a drag, literally.  With the brand's solid reputation and earned trust in its mobility solution, this brand extension is a great example of leveraging a core competency to innovate and grow. 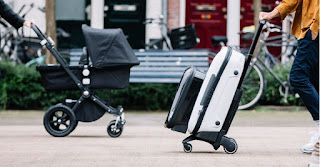 Posted by The Essential Orange at 8:36 AM No comments:

Flashmobs - they're fun, they're surprising and in this case, very moving.

Spain's Banco Sabadell created this viral hit in May to celebrate 130 years in business and as a way to pay homage to their community.  Don't be surprised if it brings a tear to your eye or a chill down your spine - it's that moving.  The video production shows a 100 person flashmob comprised of members from the Vallès Symphony Orchestra, the Lieder, Amics de l'Òpera and Coral Belles Arts choirs. Already it has over 2 million views.

While T-Mobile has certainly dominated the flashmob as brand building and advertising medium, as this video shows, there's still lots of room for other brands to engage a wide range audience in fun and delightful ways.

Posted by The Essential Orange at 11:26 AM 2 comments:

What do Arsenal (UK Soccer Team) and the The English National Ballet have in common? Not much, most would say, except some fancy footwork. These icons of Sport and Culture have been cleverly put together in a campaign to promote the new Citroen DS 5 called "Refined Redefined".

The ad is certain to draw lots of viewers on YouTube and positive word of mouth. The ad's originality and humour will no doubt have a positive impact on the Citroen brand. Because of the respectful yet comical way in which all the players are cast - the Arsenal team members, the dancers and the car, its likely that the ad will have a halo effect on all brands. Even Tchaikovsky Swan Lake was redefined in a refined sort of way.

Posted by The Essential Orange at 7:05 PM No comments: 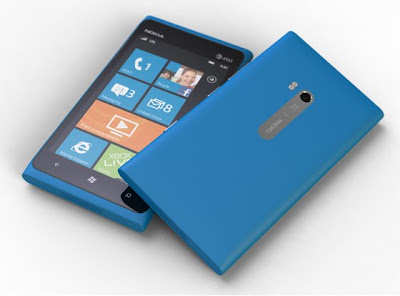 Over the weekend, Nokia launched its latest smartphone into North America - the Lumia 900.

Here are some of the best features that consumers will love:
The phone is getting very positive reviews which is big news for both companies. This could help bump Windows' share of the U.S. phone market which was only 3.9% as of February, according to ComScore. By comparison, Apple's iPhone held 30.2% of the market, while phones that run Android held a collective share of 50.1%.

This smartphone also has the potential to put the Nokia brand back on the map and top of mind with consumers in North America. While Nokia is still the dominant mobile phone leader in the world, its difficult to find a Nokia phone in any carrier's phone store in the United States. Nokia was always a revered brand known for innovation and style - remember the 90's Nokia model that fit beautifully into the palm of your hand? Nice to see that with the Lumia 900 Nokia is back in the game. 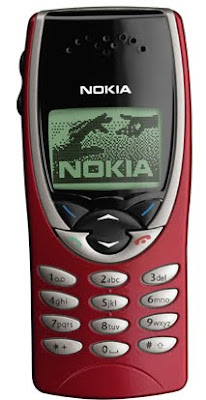 
Let's see how Nokia and AT&T are supporting the launch. It's a nice combination of PR, Events, guerrilla/experiential marketing and traditional advertising.

On Friday, there was an impressive well attended event at Times Square featuring a live performance by Nicki Minaj, a spectacular lightshow with CGI dancers on massive LED displays and coordinated effects on surrounding video boards.

Of course a video was made and as of today has almost half a million views.

The Lumia 900 ad campaign officially started on Sunday night with a 60-second TV spot starring Saturday Night Live alum Chris Parnell. The ad lays down the gauntlet to established competitors iPhone and Android. The ad calls out the inferiority of all smartphones currently on the market by calling users "beta testers" implying a still yet to be perfected product. "If you used a smartphone in the past five years, you were a secret product tester in the greatest social experiment ever undertaken,” the actor says before revealing the Lumia 900 as the result of that experiment.

Take a look at the ad here:

The spot will air over the next two months as will a handful of other 30-second spots focused on product features such as hardware design, the phone’s camera and Windows Phone’s live tiles user interface. Nokia is also placing ads on bus shelters in key AT&T markets such as New York, Chicago, San Francisco, Dallas and Los Angeles.

In addition, there were Nokia and Windows Phone “Free Time Machine” events in several locations to showcase the benefits of smartphones. By participating, people could win a myriad of fun prizes including access to Kourtney Kardashian's hair stylist, makeup artist, car service, and a personal shopper to her own shopping boutique as a prize. If you couldn't attend the event, you could go online and win prizes (sans Kourtney's prize). 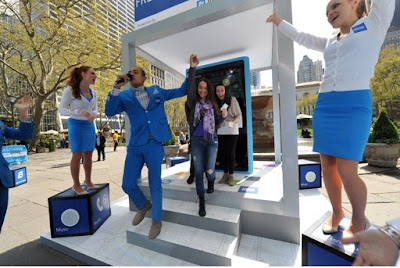 With all this activity, it looks like Nokia's Lumia 900 is off to a strong start. The phone is trending as the #1 and #2 best seller on Amazon.

So how to maintain sales momentum? According to Forrester Analyst Sarah Rotman Epps, there's a couple things Nokia needs to do right to ensure its long term success. 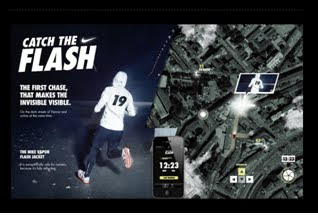 Can you imagine running through the streets of Vienna at night, running past the Opera House, the Hofburg and through the Museumsquartier, all in the hopes of winning a 10,000 Euro platinum bar?

Nike set up a multi-channel contest to promote the new Vapor Flash Jacket not only creating awareness of the jacket but doing it in a way that that showcased the jacket's unique features and benefits - the jacket is fully reflective making the wearer completely visible in the dark, thereby providing greater safety at night.

To promote the Vapor Flash Jacket's launch the German agency Jung von Matt created the “Catch the Flash” contest using both offline and online components. The idea was that 50 athletes dressed in the Vapor Flash Jackets would be running around the streets of Vienna. Contest participants would chase these runners and "flash them" - take a picture with a flash camera which would reveal the number on the runner's jacket. The person (or team) that had photographed the most numbers shot would win 10,000 Euros. 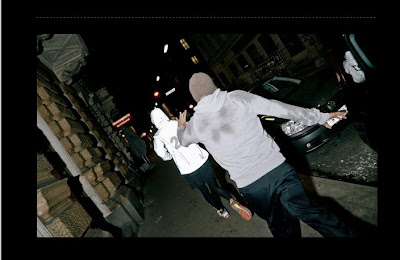 The online component had two parts. You could track your progress as a team using an app. Or you could also play the game online using a virtual runner since the 50 flashrunners' GPS data was uploaded real time. 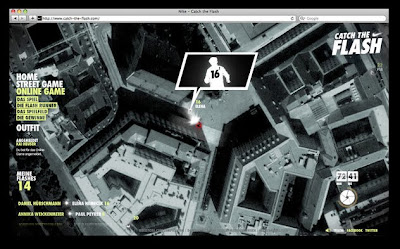 Nice way to engage fans both online and offline in a way that reinforced the brand's image as an innovator and generated awareness about the jacket's core benefit. The contest was promoted in-store, through social media and through a radio co-promotion. 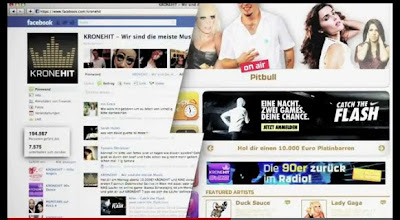 Posted by The Essential Orange at 6:50 AM 5 comments: 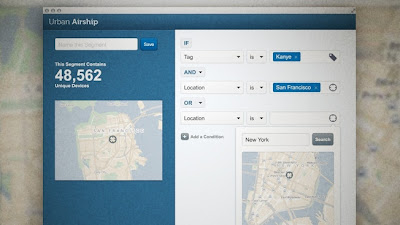 You're excited because you just launched a killer app and thousands, maybe hundreds of thousands of people have downloaded it. You realize that these downloads are from your biggest brand fans but what's your plan to keep people engaged? Did you know that most people stop using an app after a month or so?

To combat this inertia, Urban Airship developed a push notification system with the ability to deliver rich media content and allow in app purchasing and subscriptions. Until now, this was a great but rather blunt instrument. Today Urban Airship announced the launch of "Segments", an enhanced geo-targeting add-on to their existing push notification system. This service allows you to slice and dice audiences by location, time context and preferences to improve the relevancy of messages and offers.

So let's walk through a couple examples. Let's say you are a grocery chain and just received a huge shipment of ripe organic mangoes at a certain location, you could send out a geo-targeted notification including a coupon to drive traffic and purchase.

Or perhaps you are a coffee chain and have just opened a new store. You could geo-target your users with a special offer to create awareness and traffic to your new location.

According to Scott Kveton, CEO and co-founder, he doesn't yet have data on the effectiveness of the Segment service. But Kveton said customers using push notifications are seeing a 540 percent increase in daily app opens and a 30 percent increase in social sharing.
Posted by The Essential Orange at 8:33 AM 1 comment:

Email ThisBlogThis!Share to TwitterShare to FacebookShare to Pinterest
Labels: social media marketing, urban airship
Posted by The Essential Orange at 8:33 AM 2 comments:

The Essential Orange
The Essential Orange is a blog about brands and marketing. My goal is to examine how companies connect their brand to consumers and differentiate themselves in the crowded marketplace; how they build brand affinity and brand loyalty in new and different ways. I have 20 years experience building brands and marketing strategy for both Fortune 500 and start-up companies including Unilever, Labatt/Interbrew and Starbucks. I joined Starbucks in 1996 where we pioneered new ways to build brands, breaking new ground as a responsible company, committed to environmental and social change. Instead of relying on huge advertising budgets, we developed innovative advertising and marketing programs that sparked conversations and built social networks. I held progressive marketing positions in the U.S. and Canada, joining the international team as VP marketing in 2004. In 2008 I branched out on my own with a desire to work with companies who wanted to make a difference. I’ve had the privilege to contribute to their success by developing strategies and plans to build a following and effectively communicate their story leveraging both traditional and social media marketing tools.